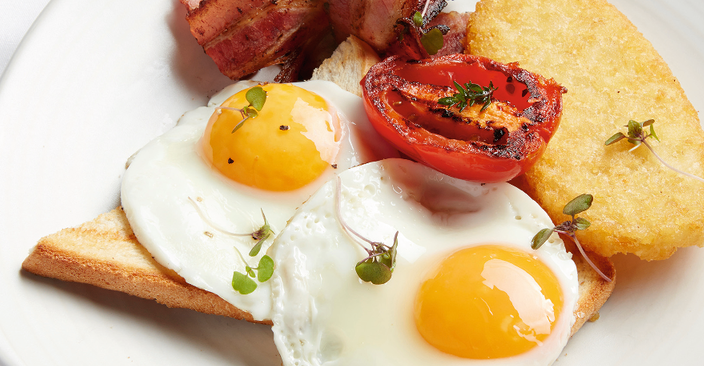 Breakfast: the most important meal?

Will breakfast make or break a students day?

As the bell slowly approaches, a quick glance around the room reveals more than just a couple students’ eyes are getting heavy and a few have even given up with their heads on their desks buried between their crossed arms.

There are a few possible reasons pointing to the cause of this drowsiness such as a monotone boring teacher, a lack-luster sleep the night before, or even the unusually warm temperature in the room. However, the main cause is most likely rooted in the students’ breakfast situation resulting in a lack nutrition or none at all.

Despite the scientific studies proving the importance of a hardy breakfast in the morning, a staggering amount of students seem to cast evidence to the side on behalf of their own philosophies concerning their daily morning routine.

Luke Mastruserio is a prime example of this type of student. As an accomplished football linemen and track and field star, Luke could be easily categorized as a healthy young man to say the least. Contrary to expectations though, Luke often skips breakfast.

Mastruserio claims breakfast just is not the most important meal of the day explaining, “Well, I drink water throughout the whole day and I only get hungry around ten-thirty or eleven in the morning anyway so I just don’t get the point.”

He continued to justify his boycott on breakfast by shining a light on his morning routine. After he wakes up, Mastruserio says, the amount of time to actually put together a big breakfast is extremely limited, plus he would rather sleep in.

Although Mastruserio may think he is functioning flawlessly throughout the day, Elder’s own nurse Jenny Boles begs to differ.

“I believe breakfast is absolutely the most important meal of the day,” says Boles. “You may think you are functioning properly throughout the day, but your blood sugar drops a pretty substantial amount when you skip your first meal consistently.”

Boles claims the drop in blood sugar is the main cause in headaches you may experience during school or the fights against dozing off in dull classes.

As far as suggestions go, Boles recommends “a well balanced breakfast” centered around protein and carbs. “The real heavy stuff” should be eaten for breakfast, where lunch and dinner should be a “lighter meal.”

Nurse Boles also adds, “The general trend should be to work your way down in how much food you eat throughout the day, but don’t get too caught up in it, because I have to admit dinner is my favorite meal. Most students have a good idea of what is healthy.”

An Elder student that DOES indulge in a morning munch is “Iron Crusher Casey” Martin. Casey is known for his reputation as a fitness fanatic, as he ventures to the gym at least once a day and eats mounds of protein during lunch like there is no tomorrow.

Unlike Mastruserio, he makes an effort to wake up early enough to grab some grub before he tracks off to school, but his thought process is still not quite in line with Nurse Boles.

“Yes, I think breakfast is a great meal to have… but I don’t think it is the most important meal of the day per say. Because even if you skip it, you could make a comeback around ten-thirty, especially if you have a big lunch,” says Martin.

A normal breakfast for Martin in the morning consists of  a couple globs of peanut butter washed down with whole milk. According to Martin, “the only way to go is whole.”

“Really the bottom line is line is breakfast prepares my stomach for more food later in the day. When I don’t eat in the morning I feel kinda sick when I try to shovel in more carbs and protein later in the day. Lunch just doesn’t happen as it usually does without my breakfast,” Martin explains.

The best approach to an efficient breakfast, according to Martin, is “calorie dense foods in small amounts.” Elder biology teacher and track and field coach, William Driehaus, has a similar perceptive.

“I think breakfast is the most important meal, because skipping breakfast will ultimately slow your metabolism down. So in that respect, I’m different than most people because I eat a lot of small meals throughout the whole day,” says Driehaus.

Driehaus also threw in the fact if you are a student who refuses to get up any earlier in the morning then a protein bar (*small meal dense in protein*) will suffice.

These small amounts of food may do the trick for some students, but senior Brett Marsh only settles for the best. The abundance of breakfast food Marsh whips up in the morning rivals the smorgasbord breakfast in Wedding Crashers.

“On a good day I will fry up three eggs over easy, four sausage links, two pieces of toast with peanut butter and jelly on it, aaaannd throw some bacon in there if I’m feelin’ really good,” says Marsh.

So if you take anything away from the opinions of these students and teacher, it is breakfast is beneficial. Even if skipping may seem healthy, eating breakfast only ends in positive long term results.