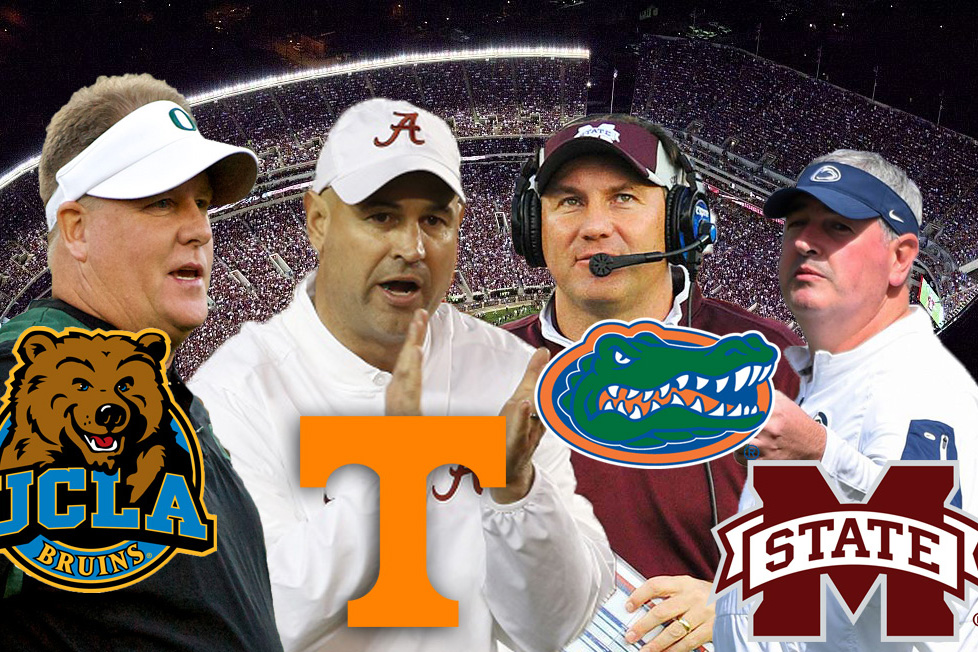 As the college football season winds down to just the few final bowl games many colleges are experiencing vacancies at the head coaching position. As this problem seems to be pretty wide spread, many programs are churning out colossal contracts just to insure that their program will secure a coach from the elite ranks.

While the media is covering the top-tiered programs nonstop, the programs that have fallen off the wagon are in a desperate search to bring their university back to the top of college football.

Rumors are flying around like bats, and the media is all over the vacancies and narrowing down just about every possible face that could be named as head coach for the 2017-18 college football season. Some of the firings are long overdue and others come as a great surprise.

Among the list of most surprising is Florida’s Jim McElwain, who had brought the Gators to back to back title games in 2015-16 seasons. He was let go after this year’s team finished with a 4-7 record. For those of you worrying about the well being of Jim McElwain do not fret, he will be paid $7.5 million by Florida to cover the cost of his buyout.

Florida has poached a familiar face by naming former Mississippi State head coach Dan Mullen, who is the winningest coach to ever be hired in Florida history. Mullen is notoriously good at developing quarterbacks and is responsible for coaching Alex Smith, Tim Tebow, Dak Prescott and Nick Fitzgerald, all of whom have produced outstanding numbers throughout their careers. The Gators are hoping that coach Mullen can bring good quarterback play back to Gainesville as the Gators have had an absence of good QBs since  Urban Meyer had left. The Gators are trying to get back to the prime years, and Dan Mullen seems to be the most qualified fit for the job.

The Bruins are another school to acquire a big named coach, Chip Kelly. He is the former coach of the Philadelphia Eagles and San Francisco 49ers and is thought to have what it takes to  bring success to the Bruins in the coming years.

Kelly definitely has been there before, as a former coach for the Oregon Ducks he has been pretty successful leading his teams into BCS bowl games and even the national championship in 2011. Chip Kelly has been in the Pac 12 and for the most part knows what can be expected by each team. Kelly was rumored to be favored for the job at Florida, but ended up signing with the Bruins for $23.3 million over five years with a buyout of $9 million. With experience coaching both sides of the ball, Kelly has crafted and mastered a unique offensive playbook often times challenging defenses, although success was not as good in the NFL. He is hoping to produce results and numbers similar to those of when he was at Oregon.

Tennessee had one of the worst years in program history, finishing dead last in the SEC East without a single win in their conference nor on the road. It has surely been a rocky road for Rocky Top, finishing just 4-8 is not usually average for the Vols and it put many fans in fury. To sum up Tennessee’s year they had previously been turned down time after time after promising to sign copious contracts to mediocre coaches and got turned down by just about everyone. The Vols went on a span of potential hires ranging from coast to coast including: John Gruden, Mike Gundy, Mike Leach, Jeff Brohm, David Cutcliffe, Dave Doeren, and Greg Schiano (which is another story). I’ve heard rumors that the Vols have even offered Elder Panther’s head coach Doug Ramsey $30 million over three years and he declined. The Football program at Tennessee is utterly pathetic, and how ironic that it would be so hard for The Volunteer State to find someone fit for the job. The Vols have even had to follow the firing of Butch Jones with the firing of AD John Currie after his embarassing attempt at finding a new football coach. Although it has been a mess for Rocky Top, hiring Pruitt could be big for the program and could definitely head them in the right direction towards the top of the SEC East. I don’t think that the results will be what the fans are expecting, but I think he is surely a step up from Butch Jones and can bring back the middle of the road Tennessee team.

I could write this article solely on how badly Tennessee has looked over the past month, but I will resort to my Christian values and refrain from going into too much detail. I think that the bottom line is that the head coaching position at Tennessee is the biggest trap job in the country. On paper it looks great, Neyland stadium is filled to the brim with fans every Saturday, the pay is great, and you’re just a couple hours away from Nashville. Seems like an awesome job, but with some of the most demanding fans in the country if you can’t win at Tennessee, you’re a goner and winning in the SEC is far from easy.

With Coach Mullen pulling out the rug out from under State, Moorehead might need more time than the other coaches. He is currently in damage control as he is facing de-commitments left and right as recruits are panicking that coach Mullen will not be coaching them next year. Most of the family is upset with Mullen but they are understanding of the decision as it does come along with more money. Beloved Mississippi State QB and former player under Mullen told media that he wasn’t surprised with the decision.  Mullen took the ‘dawgs to new heights and even brought them to #1 for the first time in school history, Moorehead has some big shoes to fill into and it will definitely tough to live up to expectations set by Mullen.

I think he can definitely have a big  mark on the bulldogs and can even have a strong start next year under the wing of Senior QB Nick Fitzgerald, who will be coming back from a gruesome ankle injury vs. rival Ole Miss next season. Coming to Starkville as former Penn St Offensive Coordinator he can keep the Bulldogs high powered offense. I think that Coach Moorehead can do a lot of good for the Bulldogs, but I still am not sure if he is fit to be a long term coach.

Among coaches who I have not mentioned are Jimbo Fisher to Texas A&M, Chad Morris to Arkansas, Herm Edwards to Arizona State, Willie Taggart to Florida State, Matt Luke to Ole Miss, Mario Cristobal to Oregon, and Scott Frost to Nebraska. The list goes on and on and on.

All across the board, college football can have an entirely different look than what we have been used to. New coaches can bring in different systems, styles, and even players. Making college football not as predictable as it has been in years past. Many more job openings are still undecided and there is a lot rule to change from the past year to the one upcoming.