Deer Run Country Club was known as one of the top tiered golf courses on Cincinnati’s west side for years. Located off of Pickway Drive, the course had attracted west side golfers for years. The club was aptly named after the many deer that could be seen passing through the course during your round. Though due to hilly terrain and lack of space the course was a bit unconventional, golfers were provided well maintained course conditions and several views overlooking the beautiful Ohio river.

It was one of the few golf courses in the area that was a private country club for a few years, which made it easier for the course to preserve fast paced greens and freshly cut carpet-like fairways. The country club had to make the decision to become public at some point, in order make the money that they lacked previously. Shortly thereafter the course was being run under new management and many of the members left the club that they had once been loyal to. Unfortunately, the prestigious golf course once known as Deer Run Country Club faded into a bed of weeds and tall grass gradually as the club never attracted the amount of golfers needed to keep the course running.

As you may imagine, residents were saddened with the news of the closing, as was I. Living with a golf course in your front yard is one of the coolest things. Deer Run had provided me with endless possibilities of fun. I could fish in the lake on Hole 5. I had a perfect football field for my friends. I had steep sledding hills due to the courses terrain that were great in the winter months.  And, of course, I could hit or find golf balls all day long. It was awesome, and with a few of my cousins also living on the same street, we were provided a great place to meet up and hang out. We thought that the golf course was going to be turned from our 18-hole playground into a row of apartment buildings.

The land that was once Deer Run Country Club was sold and the buyer had the full intention of putting in section 3 housing, which would deteriorate the property value of home owners of all Pickway, which outraged the entire neighborhood as would be expected.

Elder grad, Pickway resident, and cousin of mine, Josh Ginn went to Facebook to express his emotions on the subject. “Having grown up in Deer Run Country Club, it sure is a shame to see what hole 18 (the courses signature hole) looks like today. Nothing more than a barren piece of land for developers to throw more stick box houses on.”

Josh, known for his passionate love of designing and admiring real estate continued, “… There’s a right way to develop land and a wrong way. This is a prime example of the wrong way. I was educated at a top tier school that taught me to develop land in a fashion that is cohesive with the surrounding environment. To build with the land, not against it. To blend existing terrain and features through thoughtful, responsible and sustainable design.” 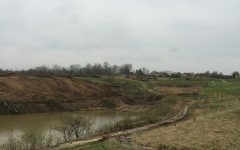 … there’s a right way to develop land and a wrong way. This is a prime example of the wrong way. ”

Josh’s post truly expressed the true feelings of all residents who preside on what was formerly Deer Run Golf Course. The Course has been closed for a couple of years now, but it was not until this past spring that builders had started action on the future neighborhood. After the current landowners met with a group of Deer Run home owners they arrived at the decision that the holes on the side opposite of the club house are to be kept as it is, and no construction will be done on that side at this point in time.

As for the side of the street the clubhouse was on, Fisher Homes will be building a few houses similar in structure to the homes on Bridge Point in Dent, Ohio. These houses will range in price of anywhere from $357,900 to $417,900. Though it is not ideal that the golf course is gone, these homes are at least a step up from the apartments. Construction on this new neighborhood has started, already in place is a black top street, but other than that, the process is still in its very early stages.