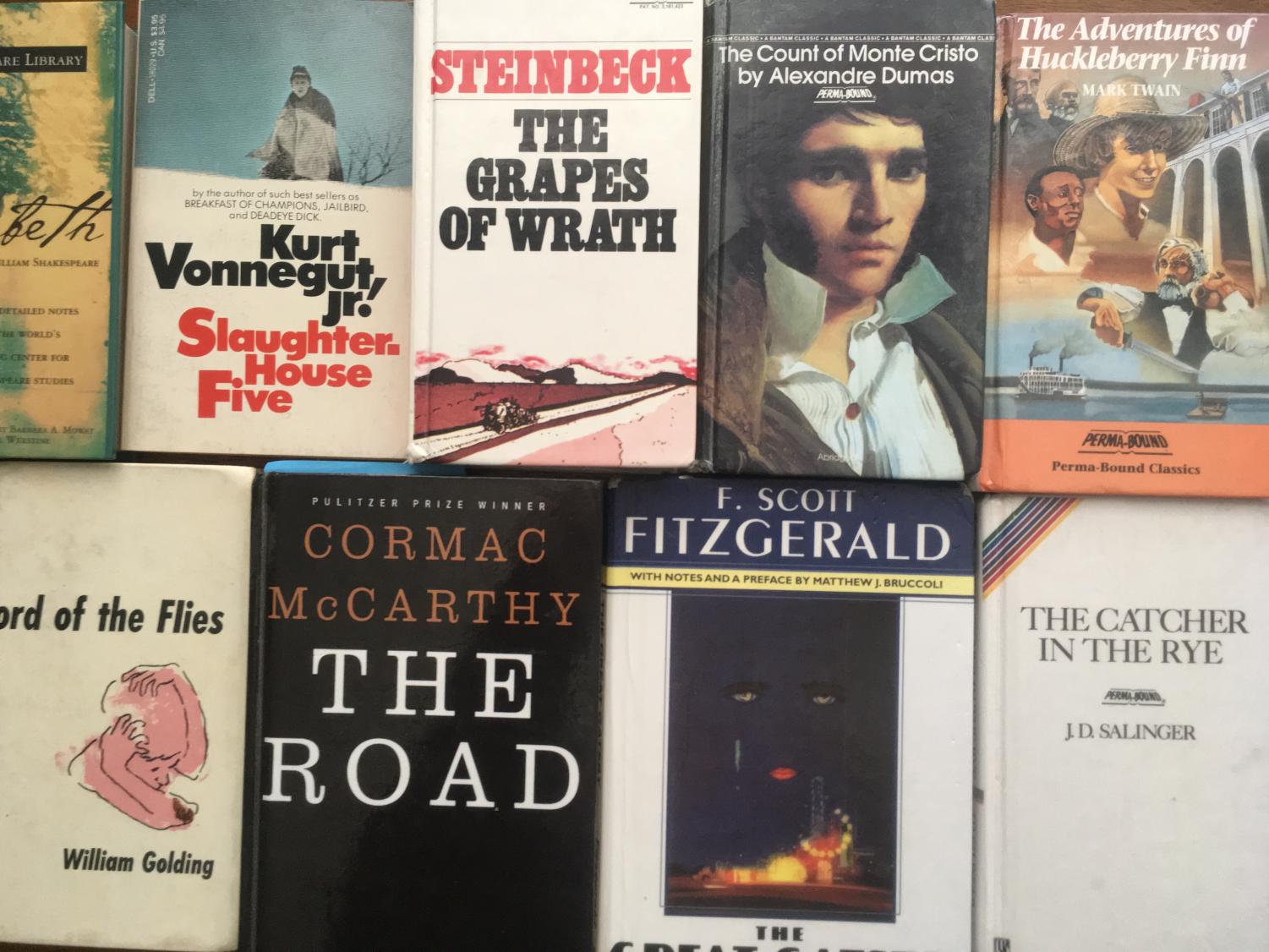 I can still remember nervously waiting in my over-sized desk as Mr. Alig chucked his novels fully across the room as a form of distributing them to his quiet classroom packed with anxious freshman.

Fast forward four years later, and just this week I found myself being startled by a new book landing from a high altitude, courtesy of Mr. Weinheimer.

The novel distribution process is similar throughout the four years here at Elder, however, every time a literary work is plopped down on a desk a funny thing seems to happen… the cover changes. The content changes. The entire aura of the classroom changes.

Whether this change is a positive or negative turn of events can be a surprisingly controversial topic. Therefore, let me serve as your novel survivor guide and set the list strait regarding the best and truly worst books taught at Elder.

While The Count of Monte Cristo may be the longest novel Mr. Alig’s freshmen read, it has been crowned the crowd favorite among 10th graders, right beside And Then There Were None, a suspenseful murder mystery novel.

The Count of Monte Cristo is mainly highlighted not only through its vengeful, romantic, and entertaining plot, but also Mr. Alig’s deep interest and enthusiasm for teaching the novel, as he promises “a huge turn of events” every night the students are assigned to read.

“My favorite so far is The Count of Monte Cristo. Mr. Alig gave us this classic, and it’s a real page turner,” said freshman Gus Middendorf.

I Am The Cheese (Freshman: Worst)

Upon simple inspection of this young adult novel’s title, it can be inferred I Am The Cheese will not be a “page turner” as the The Count of Monte Cristo was previously described.

I Am The Cheese follows a teenage protagonist, Adam Farmer, and his personal struggle with his real identity as a result of psychotherapy and witness protection program issues. I do not want to spoil the novel for anyone potentially interested, but it has a grim ending as well.

Luckily, as a senior, my class was never taught I Am The Cheese, however, numerous complaints have been voiced from the current freshman students who have read it.

“Mr. Quat[man] hooked us up with a funky book called I Am The Cheese. I was expecting a really funny book, but got a snoozer,” said freshman Holden Nichols.

Quite frankly, Mr. Quatman, trying to teach any group of fifteen year old boys a novel with the words “I” and “cheese” with only two words separating the two is naturally just a recipe for disaster.

Lord of the Flies (Best: Sophomore)

Despite the wide range of classics covered sophomore year such as The Old Man and the Sea, Of Mice and Men, and Animal Farm, the fan favorite seems to always land on Lord of the Flies.

With its short length, easy readability, and boyish violence, most sophomores prefer this novel compared to Animal Farm or The Old Man and the Sea‘s dry and dragging tone.

Sophomore Anthony Frommeyer chose Lord of the Flies as his favorite because “he never fell asleep during it” and “Mrs. Tuttle made it a good time most the time.”

To Kill a Mockingbird (Worst: Sophomore)

To Kill a Mockingbird has a great message and meaning to it, however, in this rare case, the movie outdid the book.

Unlike The Lord of the Flies, this novel was hard to follow at times with various side stories concerning the kids in the book which did little to nothing but distract the reader from the protagonist’s real issues.

The Great Gatsby not only takes the cake for best novel taught junior year, but possibly the best literary work in Elder’s curriculum all-together.

Mr. Grimm’s passion for The Great Gatsby was noticeable in every class discussion, making every chapter more and more enticing. Not to mention the plot was wildly entertaining. After all, nearly the whole first half of the novel was Fitzgerald (author) describing weekend roaring twenty ragers at Gatsby’s crib.

Combine ridiculous parties, steamy romance drama, and a hopeful underdog protagonist, and you have yourself a perfect high school novel in The Great Gatsby.

While Junior year contained the top material I have read thus far at Elder, The Crucible may be the worst form of American Literature I have laid my eyes on.

If you are super in to the puritan stage in America, then by all means, The Crucible will be a worth while read. However, for the rest of us, The Crucible mainly served as a great way to fall asleep, as well as a platform to make fun of how early Americans used to live.

Not to mention The Crucible is technically a play, so it really does not even have the credibility to be on this list, but no one I have conversed with likes the dreaded play. Thus, the last place spot had to be filled with the worst hard back “book.”

The only piece of literature almost every senior has read this year is Macbeth, and its reviews are mixed. Seniors such as Vince Sabato “didn’t mind it” even “enjoyed most parts of the story.”

On the other hand, seniors such as Brett Marsh thought it was “the dumbest thing” he has ever read.

Personally, my feelings on the Shakespearean tragedy are mainly positive thus far. Mr. Weinheimer is a Shakespeare nut, so the classroom is usually in an organic frenzy when he starts lecturing.

So whether The Crucible is boring you to death, or The Count of Monte Cristo is getting your blood pumping, it is important to remember to at least give each book that lands on your desk a chance.

Just as someone’s favorite movies are opinion, favorite books are opinion as well. Even I Am The Cheese may end up sparking your interest despite its laughable title.