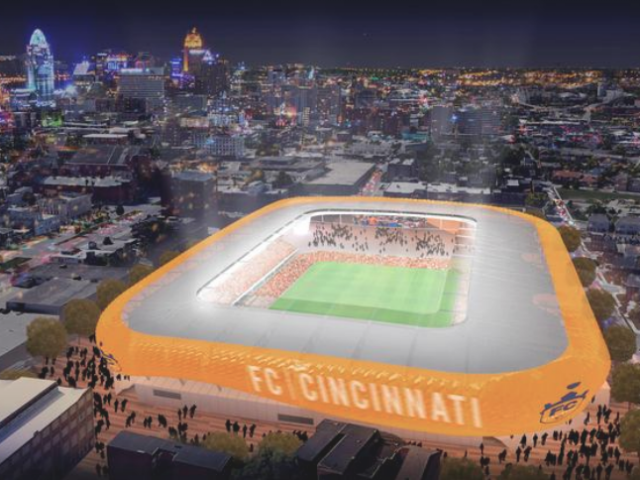 As soon as the MLS chooses them as an expansion team

“I think I like it better than Oakley and Newport. Oakley just seemed like it would be too small without a lot of good infrastructure around it, and Newport wouldn’t really be in Cincinnati. You know, I’d rather have the actual name Cincinnati,” said senior and FCC fan Jack Sunderman.

Sunderman goes to a lot of FCC games, and he is even more excited to go to them since the stadium plans have been approved in the West End. He is also very optimistic about how the stadium will affect the West End. “It’d be great to go to games. I think it’s really going to benefit the community around it. It’s going to bring in a lot of money to the area,” said Sunderman.

Mr. Bill, Elder alumni director and fellow FCC fan, is interested by the whole process the stadium planning has gone through. “It’s interesting to me. I know the MLS wants stadiums near urban cores. I thought for sure Oakley was going to be a lock, but I’m interested to see how the stadium is going to look in the West End,” said Mr. Bill.

The MLS still has not officially given Cincinnati the bid yet, but it is essentially between Cincinnati and Sacramento because Detroit does not plan on building a soccer specific stadium. That is one of aspects the MLS deemed most important.

“I think we’re going to get this bid after they realize what we’ve got here especially since the stadium holds 21,000. I think it’s going to be packed for every game, and it’s going to be a great atmosphere,” said Sunderman.

Cincinnati has to get the MLS bid before construction will begin. There are people in the West End that do not want the stadium there because they are worried about being displaced.  “It’s kind of interesting to follow this story, and how this redevelopment effects the residents down there, and the displacement of people too,” said Mr. Bill.

There are mixed emotions about FCC going to the MLS among fans though. Everyone is excited about getting a new stadium and getting to consistently play against MLS teams, but there are drawbacks. Mr. Bill already mentioned the displacement of people. Fans are also worried about the rise in ticket prices, and it will be less fun to beat MLS teams when you’re one of them. You’re no longer the underdog when you’re in the MLS.

That being said, most FCC fans really want to move to MLS. “I’ll feel pretty upset. They’ve been waiting around, delaying, and we’ve got everything we need. We got a bigger fan base than Sacramento. We’re just more passionate about the sport. If we don’t get it, we’re getting shafted,” said Sunderman.

Cincinnati is ready to be in the MLS, and the fans are very excited about both the opportunity to be in the MLS and to have their own stadium. Cincinnati has embraced the team for its USL and Open Cup runs and the excitement levels are showing no signs of slowing up.

“We’re going to have thousands of people marching down the streets. We are going to get huge crowds going through there. The stadium design looks really cool. I feel like it’s going to get people really pumped up,” said Sunderman.