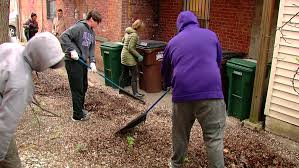 Class of '20 experience Day of Service and Retreat.

The day was organized by newly appointed campus minister, Mr. Albert Kovacic, as it was intended to “get us out of our comfort zones” while assisting other communities.

The students were split into groups ranging from 5 to 15 kids each, and each group was assigned a separate location. Some endured manual labor while others interacted with kids of disabilities and handicaps. I went on to ask several students about their service and what they took away from it.

William Doepker  ’20 did his service at Bobbie Fairfax School and told me, “I would say I got a lot out of this retreat today as I got to walk in the shoes of a teacher at a school for the disabled.” Doepker told me it was “eye-opening” to see all the kids with disabilities distinguishing his life with the hardships the students go through. When asking if he’d do it again he told me, “I would definitely do this again because it gives you a reality check on your life to realize it’s actually pretty perfect unlike some others.”

Ethan Boyers ’20 displayed his good work to the community at the Bethany House. Boyers was very animated about the importance of service exclaiming, “The biggest thing I got out of the service is that it doesn’t always have to be work; boring pointless work. Of course when you finish service you are doing things for others who need it, but it doesn’t always have to be a bad experience.” One point Boyers made that really made it all connect was when he told me, “I believe that if you find something you are passionate about and do service related to that, both parties can take away from it and it can be successful overall.” Boyer’s also added that this type of hands on service was much more valuable than literally being lectured to about service itself.

Robby Engelhardt went to Margaret B. Rost School which deals with students with disabilities and learning disorders. Rob stated, “I realize how lucky we are to live the way we do. I learned that programs like this are in need of help from their communities.” I also was part of the group that attended and got to talk with the principal and some of the teachers. The principal was very well-spoken when he talked about their goal and mission at the school. He told us, “Our goal is to try to get these kids back into the their neighboring community schools.” The way the teachers handled the kids with such support and persistence was amazing. To see the behind the scenes work of a school like this was humbling to say the least.

After returning for service, some of the faculty members served as small group leaders and led discussions about the day. After the small groups, a Mass was held in the Schaeper Center to conclude the retreat portion of the day.