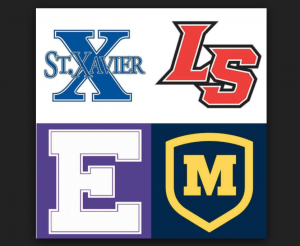 What makes the GCL so gritty

Why is the GCL so much more competitive in every sport in high school than other schools?

What leads to this toughness and grittiness attitude to make the GCL the best?

Why is it such a big game when a GCL team is playing? Why are there more fans, and more students at the GCL games? Read more to find out!

The GCL contains four high school teams including Elder. The members of the GCL are Elder, Moeller, LaSalle, and St. Xavier. The GCL is the most competitive group in high school for so many reasons.

The first reason the GCL is so gritty is because of the other GCL teams that make them so tough. Every time we play another GCL team no matter what the outcome, we always come back and learn from our mistakes. The fellow teams in the GCL along with Elder make each other better and want to compete more to be GCL champs!

All four of these high schools motivate each other in the GCL to be the best they can possibly be. When the word gets around that a GCL team has a game no matter what sport, more fans come to these games. It is very solid night when a GCL team faces off against another GCL team. It is something special to see that night when the two GCL teams face off.

No matter what kind of season they have its always a competitive game, and the crowd is always going crazy. The GCL kind of takes a title of having a target on their back because any of these four teams are all teams to beat. The GCL is top dog and they expect a dog fight. It is a unique thing to be apart of and it helps you in the long run as well. Being a part of the GCL is a very special thing and it has an affect on people. The games are bigger than ever and twice as many fans come to GCL games.