Is DJ Melillo an Elder Man?

Is DJ a good guy? 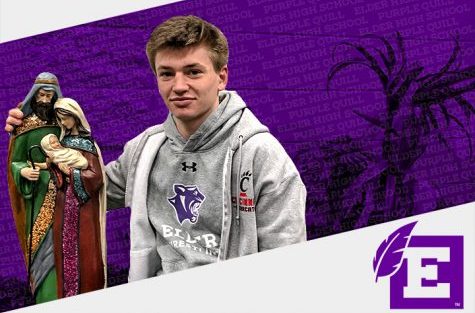 DJ Melillo (class of ’19) is the type of person that some would look up to. He is on the varsity wrestling team and is in Mr. Rogers’ journalism class, but writes very few articles on time. Even though he sometimes doesn’t get things done on time he will always get them done, eventually and you can count on that. But the question is, “Is DJ Melillo an Elder Man, and if so how?” Do you think that DJ is why or why not?

DJ Melillo says, “I am an Elder man because I’m active in the school by being a part of the wrestling team, spirit committee, and Journalism.” DJ lead the JV wrestling team for two years and DJ also hosted the pre-prom party this past weekend on 4/6/19. However, DJ isn’t the only one who thinks he’s an Elder Man.

Maxwell Deters (class of ’19) says, “DJ is an Elder Man because he possesses all the qualities necessary by being dedicated to his family, school, friends, and work. His pride in Elder is great because he’ll teach anyone that talks bad about Elder a lesson.” But does everyone think the same way as DJ and Maxwell?

Tyler Schutte (class of ’19) says, “No because I don’t like the kid.” It’s a short but deep statement, because DJ considers him a good friend. Maybe Tyler is just joking, but the world may never know. DJ is in some beef with Oak Hills students, he says that they made fun of him for hanging with his friends every weekend. That’s like saying why do you sleep in your bed every night. Even with all the hatred and beef that DJ gets he doesn’t let that stop him from helping others and continue being a good example.

As a coach and a teacher Mr. Oberjohann would know how DJ is in the

class and on the mats. DJ is a reliable and dependable wrestler according to Mr. Oberjohann. DJ had Mr. Oberjohann for math and said he was an average student that could’ve done more in the classroom. Many people would say that DJ’s greatest trait is his dance moves, this is according to Dave Brown.

However, according to an anonymous source the picture seen to the right is what DJ’s dance moves looks like. For people who are close to DJ they’ll know that he has somewhat of a temper, but don’t we all? Some would say that his anger is a dangerous advantage when used on the wrestling mats and not outside of them. However, DJ is a guy who knows where and what he needs to do for himself and for his wrestling team.

But what is your opinion on DJ, is he an “Elder Man” in your eyes?