Harmeyer to take reigns as president 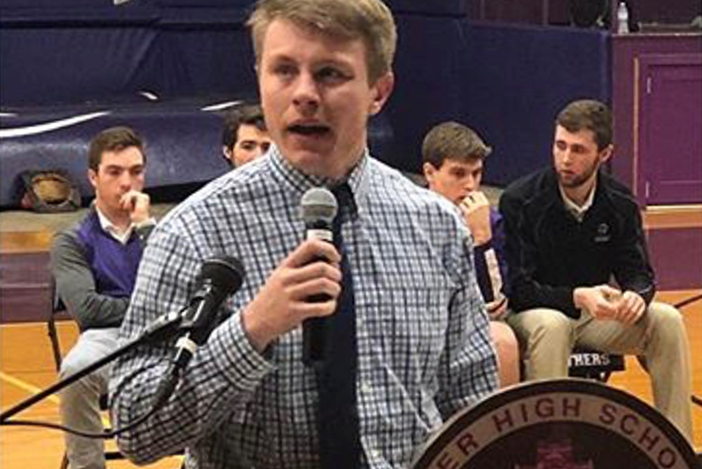 Harmeyer giving his speech to underclassmen

As the 2018-19 school year winds down, new beginnings are starting at Elder High School. And one is the election of the 2019-20 student council President, Sam Harmeyer.

Sam is a former Visitation Viking. He currently is a member of the football and track team, and participates in mock trial at Elder. Needless to say, he has a lot on his hands already, and now he is becoming President. Sam is also without a doubt the smartest person that I know, and he works his tail off day in and day out.

He gave a phenomenal speech to the underclassmen of Elder on election day, and he showed how he is a very personable and approachable guy. Sam has many ideas and plans for his year of being President, and I do not think there is anyone that I trust as much as Sam in this position.

Sam told me he was unclear at first about running for President or not. “I knew I wanted to get involved and make a difference, but I didn’t know how I would do that.”  Initially, he thought he would run for Vice President or another office position, and running for President was never really a part of his plan at Elder. “It was definitely more of a recent development rather than a long-term goal.”

Sam has nothing but great remarks for the guys who he beat out for the title of President. These candidates were Connor Ammon and former Quill staff member Joe Weber.

“Honestly, I don’t think you could have gone wrong voting for any of the candidates this year. Joe and Connor both have a lot to provide and bring to the table. They each are very involved with student council and help out wherever they can, and they have a ton of great ideas for how to make the school better.”

Sam also commented on how tight the race was, and how it was a toss up to determine the winner of the election. “Any of us could have won, and the odds just happened to work in my favor.”

As for the other elected office members of student council, Sam has much optimism and is very excited for the upcoming school year. He, like the rest of us, are eager to see the things that this group can do for the students of Elder and Elder itself. He talked about each individual elected member, and had nothing but great remarks for these guys.

He mentioned elected Vice President Jack Langen first.  “Langen is a workhorse, doing anything and everything you could possibly ask him to do.  He truly loves Elder and is a person who makes this school great. There is no one more dedicated and enthusiastic about this school than Jack, and I am ecstatic to be able to work with him as the Vice President.”

Next, he talked about the newest secretary, Jackson Geiser. “Geiser is perfect for the Secretary position. He is very social media savvy and will fit the job to a t.”  He is excited about the drive and passion that Geiser will bring to the table in whatever it is that they are trying to achieve.

Last, he talked about the fan favorite, Communications Officer, Will Tuttle. “Will Tuttle is a man of the people. You cannot look at Tuts without smiling. He exudes good vibes and enthusiasm and knows how to get people excited. If there’s a guy you want to hear on the announcements every day, it’s Will Tuttle.”  Sam nailed this one on the head. I cannot wait to see the electric factory in Will Tuttle telling me what I need to hear every morning.

I had the chance to speak with newly elected Vice President Jack Langen about his thoughts on Sam, and he responded saying, “I’m real excited. Sam’s a hard worker and a smart guy, and he’s capable of making some real good stuff happen.” Langen also spoke about some of the events that member of the newly elected student council office have been asked to attend, such as Elderama, other fundraisers, and many meetings.

One thing that Jack said he wants from Sam is, “I do want to see Sam get the people fired up at the pep rallies this year.” Sam has fire in him, and I, along with every other student at Elder, would love to see this passion come out.

I asked Sam about some of his goals as President, and his common theme was emphasizing the brotherhood-like environment at Elder. “I want to be able to create an atmosphere where everyone can feel at home and enjoy himself,” said Sam. Specifically, he wants to have events where guys get to meet new people and unfamiliar faces become familiar ones.

“I hope to help guys really experience the brotherhood that we have here that makes us so unique and to get people excited about coming to school.” He also said that he is willing to address any of the significant needs of the students, and wants to work for the well-being of Elder High School.

When I asked him what the students of Elder should expect out of him, he said, “You can expect me to be the same old guy I’ve always been.  I will try my best to be genuine and honest, to be a person that you can trust. I will try to uphold the traditions of Elder and to fill the shoes of those who have come before me.”

I will try to uphold the traditions of Elder and to fill the shoes of those who have come before me.”

He also told me that his effort will always be there, and he’ll always be looking out for the students. “I will try not to be boring but to instead make this school year fun and enjoyable. You can expect me to work my hardest to make Elder the best it can be and to do whatever I can for the betterment of Elder.”

In my few years of knowing and becoming friends with Sam, the thing that stands out most about him is how approachable he is. You can always be confident in going and talking to Sam about whatever, because you will always be heard by him, and you will get an honest and real answer. His integrity and drive is hard to match, and there are few people, if anyone at all, that are better suited for this position than Sam.

In other words, I’m confident that my senior year will be smooth sailing and filled with fun with Sam at the helm. All of us at Elder are excited to see what’s in store.