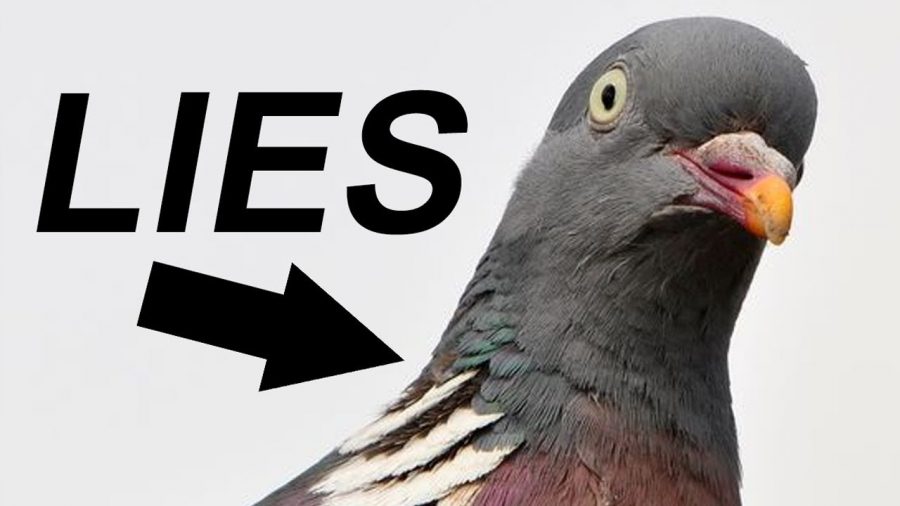 An in-depth look into the fake bird conspiracy

Can you honestly tell me that you have seen a real, living bird at any time within the past twenty-five years? Actually, let me answer that question for you: you haven’t.

Now, there are some crazy conspiracy theories out there. Whether it be the thousands of people who believe

the earth is flat, the idea that the pyramids of Egypt were created with the help of aliens, or the growing number of supposed government hoaxes, conspiracy theories have been capturing our attention for decades. In the past decade or so, there has been a growing movement defending an idea that is so bizarre I felt the need to address and determine theory’s validity. Basically, there has been a growing number of people who believe that all birds are now C.I.A. drones that spy on us and monitor our lives without us knowing. In support of this claim, believers back themselves up by supposing that in the past half-century, especially during the presidency of Ronald Reagan, all of the natural aviary creatures have been mercilessly exterminated and slowly replaced with their robotic look-alikes. Sounds crazy, right? Well, in order to truly understand this conspiracy, I checked out their official webpage (birdsarentreal.com) and read through the history section so that I could try to understand where they were coming from.

It turns out that that most of their “history” was truly only speculation and a few witness accounts that were unreliable. Without reliable information to support their claims, I have to disagree with their ideas about fake birds. There simply is too much evidence against their conspiracy. For example, what about the bird hunting industry, why aren’t reports of robotic birds being shot down happening on huge scales as they should if most birds were fake? Also, why would fake birds defecate on my car a couple times every year? Even if they had organic materials stored in their bird-like apparatuses, the sheer amount of materials needed for even half of all birds would be impossible to acquire. Sea-birds alone produce 3.8 million metric tons of nitrogen worldwide every year.

It appears that the “fake birds” conspiracy is nothing but a sham. Without proper explanation, or any convincing information at all, it is very hard to agree with anyone who believes this. It seems that the only reason someone would feel the need to spread this message would be because they are just trying to create another story of how the government is secretly controlling our lives without our consent. The only reason most people have even heard of this idea is most likely due jokes being told about how birds aren’t real. While researching conspiracy theories, I am sure you will learn about some of the stupidest ideas people can create over the smallest occurrences. Regardless, the fake bird conspiracy was very interesting to learn about, and I highly recommend reading about other hoaxes, no matter how ridiculous they may seem.