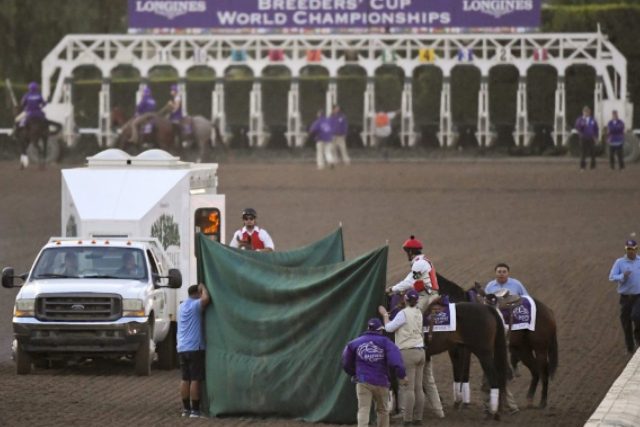 Yet another horse put down at Santa Anita

Thirty-one horses have unfortunately died at the track so far this season.

Every year, over $100 billion is bet on horse racing.

That means that the horses racing need to be in tip top shape. For a horse to be in a race, it must meet inspection and be fully healthy. However, the average racehorse lives around 30 years, but they usually retire around the age of 15. “Considering that they are athletes, they clearly have a prime, and no horse over the age of 18 has won any races,” says factinate.com.

The Breeders’ Cup and Santa Anita almost had a clean weekend of racing but when the 6-million-dollar race came around everyone was a little nervous. The race was in front of nearly 70,000 fans and a prime-time television audience. On the final turn, favorite McKinzie was in the lead and Vino Rosso was closing the gap on him. Mongolian Groom who was behind the two fighting for first suddenly hesitated. Jockey Abel Cedillo jerked on the reins to ease the 4-year-old gelding, who was only jogging on three legs. Groom’s left hind leg dangled aguishly with every step he took.

Vino Rosso charged past McKinzie to take the victory, causing cheers and a celebration by his human connections. But if you looked up the track you saw a screen that was put up to cover Mongolian Groom as a equine ambulance came to his rescue. Unfortunately, Groom sustained what Cup officials described as “a serious fracture” of his left hind leg. Given the extent of the injury, four veterinarians recommended that he be euthanized. Mongolian Groom became the 37th horse to die at Santa Anita since last December, and the seventh since the fall meet began Sept. 27.

The deaths had prompted track owner The Stronach Group to change rules involving medication and training. The Breeders’ Cup beefed up its own pre-race exams and observations of runners. Bob Baffert who is a two-time Triple Crown trainer said, “You just don’t know when it is going to happen. We try to keep them as safe as we can.” All nine races went off without incident on Sunday (closing day) of the fall meet. However, a horse in the last race was pulled up but was uninjured thankfully.

Political action committee Animal Wellness Action is urging Congress to pass the Horseracing Integrity Act, which seeks to establish a national, uniform standard for medication in the industry. It would also create an independent organization managed by the U.S. Anti-Doping Agency to oversee medication rules, testing and enforcement, according to washingtonpost.com. Beth Harris (writer of the Washington post article) also wrote, “The Breeders’ Cup, The Jockey Club and The Stronach Group are supporting the bill through the Coalition for Horse Racing Integrity. Churchill Downs, home of the Kentucky Derby, isn’t part of that group and instead wants to create a new coalition that would advocate with state regulators for fair and uniform regulation in the 38 racing jurisdictions nationwide.”

Even though billions of dollars a year are spent on horseracing, it seems as if the regulations for the safety of the horses haven’t improved much. However if the Horseracing Integrity Act is passed then we will see many improvements to help keep the horses safe while racing.