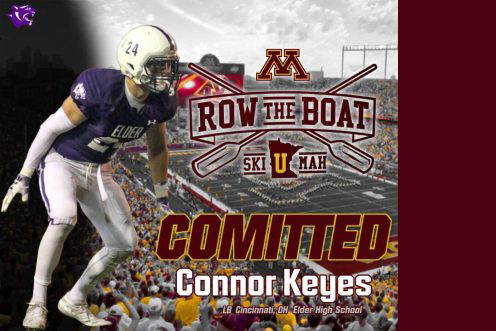 Elder linebacker/edge Connor Keyes is heading to Minnesota as a walk-on after a tumultuous journey.

There have been many student-athletes throughout Elder’s history that have worked hard and battle adversity to earn their spot on the field or onto a college roster, but not many guys have worked harder than Connor Keyes.

Keyes (Butch), who has accepted a preferred walk on offer to the University of Minnesota, has had to earn his way into the position that he has put himself in.

His two older brothers both attended St. Xavier, yet, Connor still ended up choosing the good side and coming to Elder. “I felt like I’d fit in better at Elder.” said Keyes on his decision.

Unfortunately, he broke his finger in week eight, and the injury ended up requiring surgery, and was unable to play in the 2018 OHSAA playoffs.

“We thought it was just jammed so I played the following two weeks as well, but we found out my finger was badly broken and had to get surgery.” said Keyes on his injury. He was not very highly recruited after his junior season, but he did still pick up a couple of scholarship offers from Division II colleges.

He planned on attending several recruiting camps across the region during the spring and summer of 2019, but pulled his hamstring multiple times and in turn kept him out of any sort of running. “I was only able to go to one camp, and that was the Minnesota camp.”

Butch stood out in this camp, receiving complements from the linebackers coach/defensive coordinator, Coach Rossi about his performance at the camp.

After this, Connor went back up to Minnesota to train with his cousin, Kyle Rudolph. He was to fly out on Sunday, but was throwing up a little bit the Friday and Saturday prior to his departure. Connor didn’t want to back out of his trip on the last minute, so he decided to battle through the sickness and fly up to Minnesota.

“Getting off the plane was the worst it felt, and I could hardly walk to Kyle’s car. But I still tried to play it off not wanting anyone to think I’m a coward for having a stomach ache, which my dad did say, ‘don’t go up there complaining about your stomach’.” said Butch.

The next morning, Connor still felt terrible and got sick many times that morning alone. Kyle set up an appointment with the Vikings team doctor, and the doctor told him he had a ruptured appendix which had been leaking for days.

He was supposed to be out of the hospital after surgery within a couple of days, but more and more complications kept happening, and Connor stayed in the hospital for a total of fifteen days. “The fourth day I was there they shoved a tube through my nostril, through my throat, and into my stomach to suck stuff inside of me out.”

Butch wasn’t able to eat or drink anything for those fifteen days in the hospital other than being hooked up to an IV. He lost thirty pounds over that two weeks and a day period. “Even days and weeks after I got out of the hospital my stomach still hurt.” said Keyes.

He wasn’t cleared to lift for six weeks after he got out of the hospital, and missed the entirety of camp and the majority of double practice days in the offseason. By week one, however, he was back on the field, but not feeling 100%, “First couple of games, the coaches were holding me back from playing because of my surgery and they wanted me to be healthy for the full season,”

“The first game of the year, I felt and was super slow so I was extremely mad and started running sprints up hills in my neighborhood on Sundays after the first few games of the year.” said Keyes.

In week four of the regular season, Connor was asked to switch from linebacker to defensive end, which he gladly accepted. The rest speaks for itself, as Connor was a First Team All-GCL selection, and was the defensive lineman of the year for the Panthers.

“I knew going into the season we would have a great team. It was a great team to be a part of and it’s a shame it had to end up as State Runner-Up.” said Butch on the season.

Connor picked up one Division I scholarship offer from the Virginia Military Institute in the middle of the regular season, and that would be his lone offer from a DI school.

On January 15th, Connor received a preferred walk on offer from Minnesota, and committed two days later to the Golden Gophers. He said this about his experience on campus at Minnesota, “What I really loved was Coach Fleck brought me into his office and just talked about their culture, and I felt like Minnesota would be a great fit for me.”

Looking back on his time in the purple and white, Connor will forever cherish the experience of playing in the Pit. “There isn’t one high school in the country that has a stadium like ours, and I’ll also cherish playing with my brothers and all the coaches who were always there for me on and off the field.”

Connor has a mentality that is second to none, and he will be bringing his killer mentality with him when he heads up to Minnesota. “Make the most of it! Never give up and work hard. I’ve learned over my years at Elder that hard work and patience will get you to accomplish things small-minded people don’t think you could ever do.” said Connor.

I have personally known Connor since the third grade, and he has been and always will be a great friend to me. I have witnessed first-hand the intensity and passion that he brings to football and lifting, and I have witnessed the positivity and happiness that he has at school every day. Everybody notices it.