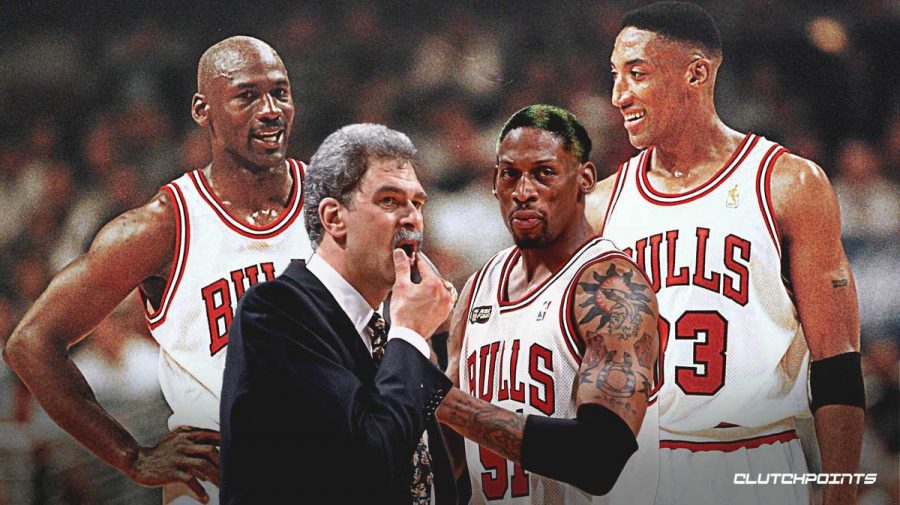 Looking forward to ‘The Last Dance’

Perhaps one of the only bright spots of many people’s time in quarantine is the newfound availability of watching shows on Netflix and other streaming services. With all this free time I have found the time to watch multiple shows. Although many of us would rather be playing sports such and doing other school related activities, we must try to find other things that we can look forward to. One of these upcoming things to look forward to is the series The Last Dance.

This upcoming series is a 10-part documentary about the 1997- ‘98 Chicago Bulls basketball squad. This historical team was looking to win their sixth title in eight years and their third in a row. That year, a film crew was granted permission to gain all-access content and travel with team so there will sure be never before seen footage of this historic squad.

The Bulls led by then 5-time Finals MVP Michael Jordan and first team all-NBA player Scottie Pippen were one of the greatest teams to ever assemble. Many believe, including myself, that this Bulls team is the best team ever and held the record for most wins in a season (’72) until the Warriors broke that record in 2016. There were not many teams that could stop or contain this lethal Bulls squad. Their style of play and success is why so many agree with me when saying that this is the bets team ever.

The team also had all-NBA defensive player and all-star Dennis Rodman who remains one of the biggest and most intriguing personalities the league has ever seen. Part of the show talks about all the distractions that he caused and the ripple effect it had on the team in which the media thrived upon. At this time, the media was beginning to become the monster that it is nowadays and players had to adapt to this new age of exposure. Players such as Jordan, Pippen and Rodman were the biggest targets to the media because they were the most talented which is something seen in today’s age with players such as LeBron James always being interviewed.

Another character in the Bulls’ organization was their head coach, Phil Jackson. Jackson ranks among the greatest coaches to ever roam the hardwood winning 11 rings as a coach and two as a player himself. Jackson was one of the biggest figures everywhere he went and drew attention to the media also.

In the offseason before the ’97- ‘98 season, Jordan was in the news for saying that he would play for no other coach but Jackson. After the organization came out and said that this would be Jackson’s last year with the team, Jordan said this statement which sent shockwaves all over the NBA.

The series involves interviews from multiple celebrities such as Kobe Bryant, Magic Johnson, Charles Barkley, Roy Williams, Bob Costas and Barack Obama. Along with the interviews from players on the team there is sure to be some epic commentary.

The release date was pushed up due to popular demand because of the recent quarantine. The show is expected to be released on Sunday April 19th at 9:00 pm on ESPN and will also be available on Netflix.