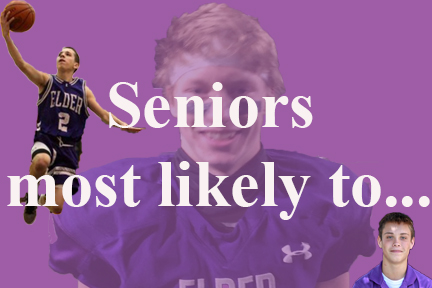 Seniors most likely to…

With the year winding down and the vast majority of the seniors’ time at Elder behind them, we thought it’d be a good time to reminisce about our classmates’ tendencies and also predict what the future has in store for some members of the class of 2020.

Most likely to brighten your day

Seeing Willard or Frank individually is enough to lift one’s spirits, but seeing them together makes it impossible not to have a smile on your face. These two are the bearers of good cheer and the dynamic duo of glee. To put it simply, Willard and Frank are two up-beat, likeable guys that are fun to be around. They’re two guys that are always smiling when they’re around each other, and you can’t help but smile yourself. You have no choice but to be happy around these two. Congratulations and thank you, gentlemen.

Most likely to start a band

Quentin has utilized his passion for music by participating in the band during his time at Elder, and he plans to continue focusing on music in college at Ohio State, where he plans on majoring in Jazz Saxophone Performance. Quentin’s musical ability and dedication made him an easy choice to win this award. Whether or not Quentin will go on to start his own band I do not know, but I have to believe that he will be successful in some music related field. Good luck, Quentin.

Most likely to win the lottery and lose the ticket

“I would lose my head if it weren’t attached to my shoulders.” Joe Weber told me those words as we sat outside of King’s Island many years ago, unable to get in because Joe lost his pass. Joe is the kind of guy who always seems to be looking for his phone, keys, or wallet. Although Joe isn’t necessarily the luckiest guy in the world, I am convinced that if he were to win the lotter, it is a 50/50 tossup that he would lose the ticket. We all misplace stuff from time to time, it’s just that Joe does it more often than the average joe. There is no other way to put it: Joe is a skilled veteran in the field losing things.

Most likely to fall asleep in class

No brainer here. Bailey gets about four hours of sleep every night but gets that number up to seven or eight by the time he leaves school. Bailey is borderline nocturnal and will fall asleep in any class no matter who the teacher is. Not only does he sleep as often as anyone in the school, he sleeps in the most uncomfortable looking positions. To Bailey’s disadvantage, most of his favorite sleeping positions (like resting his head on his hand with his face pointed towards the ceiling) make it quite easy for teachers to spot him. He’s not the sneakiest sleeper in the halls, but boy is he impressive. To Bailey’s credit, though, he spent more time awake this year than in years past. Congratulations, Bailey.

Most likely to get called down to Mr. Flaherty’s office

This award goes to the person most likely, not the most deserving. Mason is among the most innocent kids to ever walk the halls at Elder, but, unfortunately, he is also the recipient of this award. Mason spent more than his fair share of time in school on Saturdays, but he handled his punishments with grace that any other students would fail to match. Mason is well-liked among both the faculty and staff and the student body. Mason was also the recipient of the only standing ovation in the cafeteria that I’ve ever seen. Congratulations, Mason.

Most likely to get married first

This award is pretty self-explanatory, who’s willing to tie the knot first? Evan and his significant other, who shall remain nameless, have been happily acquainted for quite some years now. To be exact, one does not have enough fingers to count the number of years this loving relationship has gone on, but don’t be surprised when you get a wedding invitation in the mail in the near future. Congratulations, Root Canal!

Most likely to come back and teach at Elder

Kevin, the official voice of ENN, has a special knack for getting his message across. Some have even compared his voice to the notorious, Morgan Freeman.  It is not a rare occurrence for him to be spotted quoting scripture verbatim, in a given religion class here at Elder. Klayer not only has a knowledge of religion, but a wide variety of subjects as well. Two of his extra curriculars included Mock Trial and Academic Team. It would be no surprise if we hear of a “Mr. Klayer” walking the halls of Elder sometime in the future. Well deserved, Kevin!

Most likely to stir up an argument…

For anyone that knows Dugan, he concocts some of the hottest takes known to man. What goes on in that man’s cerebrum is simply uncanny, which is why he takes home this award. Most of his banter is spoke at the lunch table where he disputes just about everything anyone has to offer. Just remember… whatever Dugan says, he’s always right. Dugs, congratulations… you deserve this!

Most likely to go bald by the age of 25…

This award is unfortunately a sad reality that most of us will face sometime in life, some sooner rather than later however. Since freshmen year, Schmitt’s hair has gotten thinner and thinner and thus migrated further and further back toward of the back of his head. However, he’s taken it like a champ and sports the look with a keen sense of style every day. By the time our 5th year high school reunion rolls around, Schmitt could be look like a whole new man. Congratulations, Justin!

Most likely to live in a cabin in the woods…

This one goes out to our biggest outdoorsman. Dakota, also called “Deer-hunter” by Mr. Gergen, is about as country as they come. Simply put, he loves huntin’, fishin’, and lovin’ every day. What more can be said? He belongs in a cabin in the woods out in the great state of Montana. Congratulations and best wishes, Dakota!