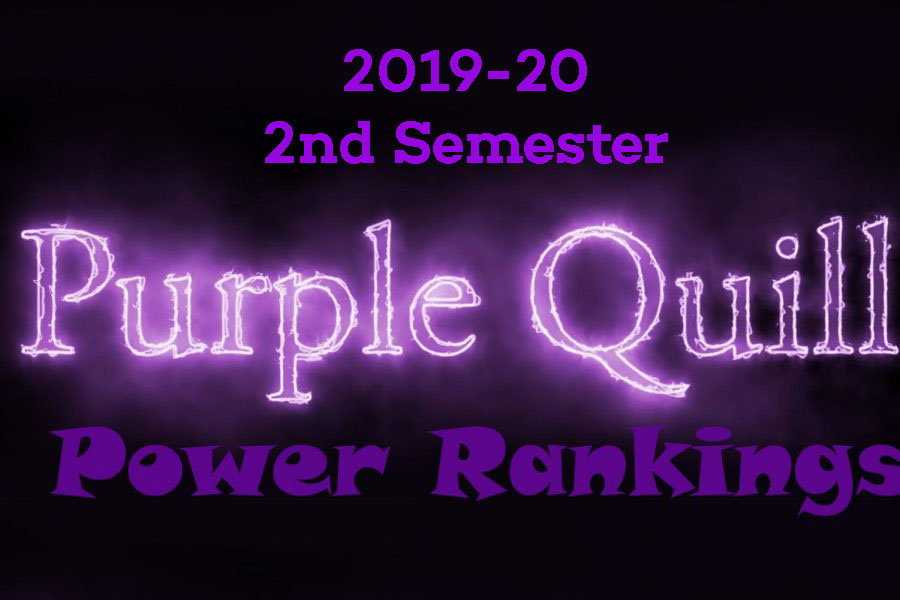 It’s a tradition like no other, The Purple Quill semester power rankings. While this has no real meaning whatsoever to the grade we receive in Journalism class, it is a fun thing to do to wrap up a semester by ranking the semester’s staff.

As co-editor in chief, I humbly and gladly accept the responsibility of creating these power rankings. I try to be as unbiased as possible.

Without further ado, I present to you the 2019-20 second semester staff power rankings.

Dakota started off the semester making solid contribution after another. In all honesty, he was a very solid staff member. Sometimes, though, he got a little sidetracked with Call of Duty or something. Also, once quarantine started, Dakota didn’t do a whole lot, so that puts him at the bottom of the list. Overall, a good staff member that saw the senior scaries early on.

Henry does some nice things for the Quill. Pretty much goes to the beat of his own drum. Minds his own business, and contributes. That’about it. Nothing really stands out too much about Mazza, but all around, is a solid staff member with a good future with the Quill, if he decides to come back.

Gus is a very good staff member. He’s got a lot of very good ideas and isn’t afraid to volunteer for an assignment from Mr. Rogers. Kudos to Gus for that. I firmly believe that he’ll be a great contributor next year for the Quill, because he was already very solid in his lone semester.

Marlman will be a nice editor next year. The man just produces. He writes about the news like all the time, and it gets a little old, but he puts together some nice stuff. The juniors were very solid this semester, and there is a glimmer of hope for the future under the leadership of Lukas Marlman.

Another very nice staff member. The stuff Jake writes is truly funny and witty, it’s just that Jake didn’t have a whole lot of drive for this class. He turned stuff in, but sometimes, in savage fashion, didn’t put a whole lot of effort into it. His claim to fame for the Quill will forever be that he was the star of the dap video, which was very nice. It’s been fun, Jacob.

Jason had a lot of nice articles this year on a wide variety of topics. He’s a guy that you could rely on to turn his stuff in on time and with good quality. Cannot complain about Jason’s contributions this semester.

Nich has hit legendary status in his lone full year on staff. He created his very own “Per My Source” series, as well as starring in podcasts and videos. He always turned things in on time, and always made very enjoyable content. Nich is an all-timer in Quill history if you ask me.

Nick was a great member on the staff. He risked it all by eating a tarantula for a video, and it came with a price, but Nick made great contributions the entire semester. Nothing bad to say about this guy.

Another repeat Quiller, Robby was a fantastic staff member. Was a part of the Jungle Jim’s trio that was a nice success. Robby loves Deni Avdija for no apparent reason, and we gave him a hard time during class for that. But, Rob was a pretty darn good Quiller for two consecutive years.

Tom is the epitome of a great staff writer. Always getting his stuff in on time, and never failing to make good content. All year round, Tom was great on staff. From videos to podcasts to articles, he did it all and was good at it. Bravo, Tom. I’m still proud of you for eating the hot wings back in the winter.

Mike was talking a lot of rah-rah, especially to me, about his entrance to the Quill. Mike had high expectations of himself from the start, and in all honesty, he exceeded them. Mike made some great stuff in his lone semester. I’ve got to hand it to the guy. Nice job, Mike.

Carm is an all-time great in the history of The Purple Quill. He made unbelievable contributions for a full two years on staff. Certainly a guy who you love to be around and who you love to have class with, Carm proved his worth during his time on the Quill. They don’t come much better than Carmine.

I won’t lie, I’ve been plotting this for a while. I’ve been a staff member for three years, and I’ve loved every second of it. I’ve made some pretty great things over these past three years, and it’s only fitting for me to exit high up on the list. Not trying to toot my own horn, but I’m a first ballot hall of famer when it comes to The Purple Quill. Also, I wanted one last one-up on Carm. It’s been a fun ride, and I’ll miss it.

I would be remiss if I didn’t give Jack the nod at number one. He’s done so much not only for the Quill but for Elder in general, that he deserves to be at the top. He has been a phenomenal staff member all year long, and has impacted Elder in so many ways. Jack was unbelievable all year round. Congratulations on cracking #1, Jack.