After a dominating win against Memphis, Cincinnati is ranked as the 6th best team in the nation. 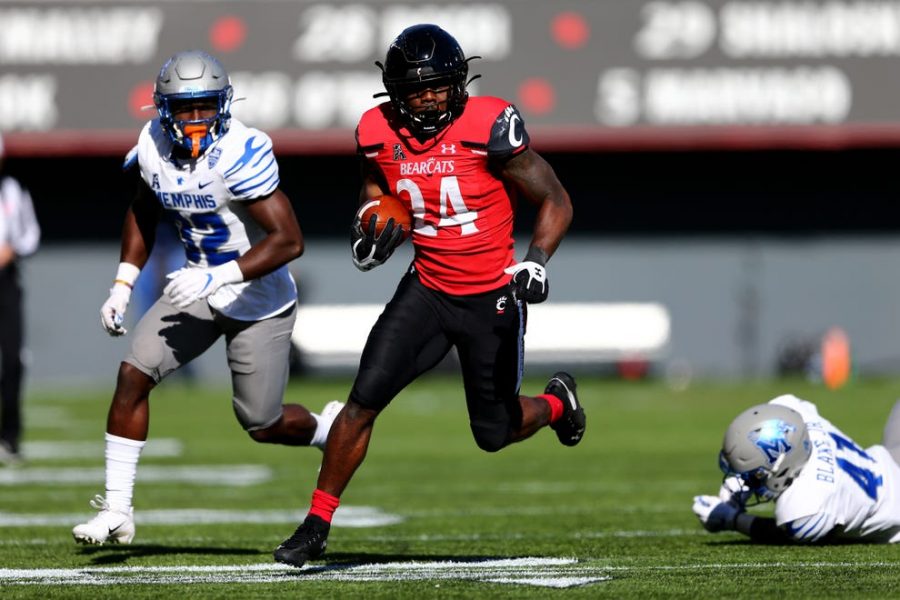 Gallery|11 Photos
commercialappeal.com
Jerome Ford runs the ball in for a touchdown.

Coming off of their second straight 11-win season of the Luke Fickell era, expectations were high for the Cincinnati football team this year. However, few could have predicted the sheer dominance they have been showing over the past five games.

Cincinnati is 5-0 overall, 3-0 in the AAC, and 2-0 against ranked teams this year. Their offense is putting up nearly 40 points a game, while allowing only 12. Their defense is one of the best in the entire NCAA, and Desmond Ridder is making opposing defenders look silly.

What I mean to say is that UC is pretty dang good this year. Good enough to push for a playoff spot.

Unfortunately for the Bearcats, there are some roadblocks in their way.

Teams in the way

With Trevor Lawrence on their roster, Clemson has been dominating their opponents. However, with Lawrence out due to COVID, Clemson looked vulnerable against unranked Boston College last week.

As for Notre Dame, they have also looked pretty good this year. Like Cincinnati, they have one of the best defenses in all of college football.

When Clemson and Notre Dame face off on Saturday, the outcome of the game will have huge implications for the CFB. The winner will almost certainly move to No. 1, and depending upon the loser, one team could fall out of the Top 4.

If a Lawrence-less Clemson loses, they have a pretty good shot to stay in the Top 4; however, that is a different story for Notre Dame. If they lose to Clemson, especially a Clemson team without Trevor Lawrence, Cincinnati could leapfrog them in the rankings.

The only tough game left on their schedule is a home matchup against No. 24 Auburn. There is very little chance they give up their spot to Cincinnati

This year, Ohio State looks to make up for their playoff loss to Clemson last year. Justin Fields continues to be a Heisman Trophy candidate, and their defense looks as good as ever, despite losing Chase Young and Jeff Okudah to the NFL.

They have breezed past their previous two opponents, and I expect them to similarly breeze through the rest of their schedules, despite tough matches at home versus No. 13 Indiana and No. 23 Michigan. Like Alabama, they should remain in the Top 4 for the rest of the season.

Georgia has already lost once this season. Their quarterback, Stetson Bennet IV, has looked kind of bad at times this season.

A loss this Saturday to No. 8 Florida would definitely put them below UC in the rankings, but Florida could move up and take their spot.

No. 9 BYU, led by quarterback Zach Wilson, could be a dark horse candidate for the playoff; however, their matchup this week against Boise State is their only ranked match of the year.

If No. 10 Wisconsin ever recovers from COVID, they could be challengers for the playoff.

Although No. 12 Oregon has not played a game yet, a couple quality wins could be all it takes to leapfrog Cincinnati.

No. 13 Indiana has already upset Penn State; however matchups against Ohio State and Wisconsin will probably put a couple blemishes on their record.

College football’s biggest longshot, No. 15 Coastal Carolina is undefeated, but I doubt the AP voters will give the Chanticleers any love.

The real threat to the Bearcats

Quite possibly the biggest threat to UC’s playoff shots, the playoff voters are notoriously picky and stupid.

Since they have no games left against ranked opponents, UC is probably going to get overlooked by the voters. Furthermore, there is precedent of the voters not choosing dominant AAC teams.

Look no further than UCF in 2017. They were the NCAA’s only undefeated team, yet they missed the playoff. They opted instead for bigger name teams, even though all four of them had one loss on the record.

The TV ratings are higher when Alabama plays than when Cincinnati plays, and all that matters to the NCAA is the almighty dollar.

Unfortunately for the Bearcats, their playoff shots are pretty slim, whether they win out or not. However, as they say, hope springs eternal.

At the very least, they will do better than the good ol’ Bengals.