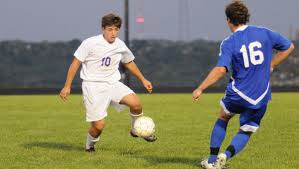 On Saturday September 12, a new record was set in the history books of the Elder Panthers. Senior forward Joey Sabato of the Elder Soccer team surpassed the old school record of goals scored in a career. The previous record was held by former player Anthony Meyer ’08 at an outstanding 43 goals. But Sabato managed to break the record in Saturday’s dogfight against Summit Country Day.

Going into the game, Sabato trailed Meyer on the all-time list of goals by one at 42. But an early goal in the first half assisted by Brandon Murphy gave the Panthers the lead. Shortly after that Summit equalized the contest and made it one to one.

However in the latter part of the game, the soon to be new all-time goals leader in Elder history scored again to put the Panthers up by one, and to crown himself the new goal king.

“It was kind of hard to believe,” said Sabato. “I tried to keep my mind off it as I was playing.”

The talks of Joey possibly breaking the record were spreading through Elder all week, and the students were very anxious to see it happen. “It’s pretty special seeing someone as good as Joey do something this awesome,” said Junior Braden Connor. “I wish I could have been there to see it live.”

In the two games that Sabato played when it was possible to break the record, he said that he tried his hardest not to think about it, but to focus more on the game because winning the game is more important than the record.

“We tried not to bother him about it,” said Junior mid-fielder Sam Collins. “We knew it, we knew that he knew it, but it was better off  if we didn’t say anything”.

It’s similar to a no-hitter in Baseball. If a pitcher has a no-hitter going, you simply don’t say a word to him about it. You just keep your mouth shut and play the game.

When looking at the career that Joey Sabato has had, it is very hard to argue that he has not been possibly the best soccer player to come through Elder. Not only has he just broken the record of most goals scored in school history, he also is now moving into his fourth year as a Varsity player. That alone  says enough about how great a player he is. But on top of all that, he is also the reigning GCL South Player of the Year.

Sam Collins agrees with me.

“He’s easily the best player that I have ever seen,” said Collins.

We can see that what Joey Sabato has accomplished so far in his Elder soccer career is nothing short of amazing. But let’s hope he and the rest of the Panthers can build on this success and possibly bring home an even bigger trophy this season.