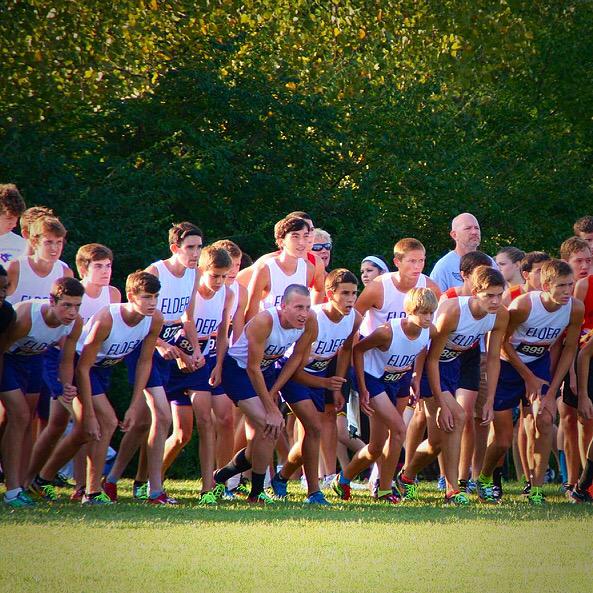 The Purple Pack’s top 15 runners getting ready to start a race at Miamisburg.

Once school is out and summer starts, most high school students are sleeping in until noon and sitting around watching TV all day, except for the cross country team at Elder. Every morning throughout the summer, the Purple Pack is up bright and early for a seven o’clock practice at Elder.

While all members of the team were putting in the miles, five of the Varsity runners really stood out with their mileage totals. Seniors Eric Ostertag, Kyle Kroeger, Drew Mack, Kyle Kehling, and junior Ryan Schenkel led the team of runners by running an outstanding total of 620 miles each.

“My junior year I only ran 440 miles and it took me half the season to get to where I wanted to be physically. So this season I got a jump start so I didn’t have any room for doubt,” explained Ostertag when ask about the high summer mileage total.

Kyle Kehling commented of the feat as well.

“When we started practice in the summer, I knew that some of the past runners that accomplished running 620 miles, like Michael Huschart last year, were the top runners and I knew I had to do it,” said Kehling.

At the end of summer practices, the team voted the two seniors, Kyle Kehling and Eric Ostertag, as the two captains.

Head coach Steve Spencer has some high praise for the two captains.

“Eric and Kyle have done an excellent job this year. Both of them have done great things as the captains of this year’s team,” said Spencer.

As the end of the season approaches, the Purple Pack has some high expectations. Ryan Schenkel, a member of the varsity team all year, is expecting the team to go far this year.

“I’m expecting to go all the way to state this year. It’s something we have been striving for since June first,” said Schenkel.

If this year’s team can make it all the way to the state meet, it would be quite a feat. The Elder Cross Country program hasn’t been the powerhouse they used to be while winning four state championships within seven years in 1982, 1986, 1988, and 1989. The last time the Purple Pack qualified to the state meet was in 2010 and missed qualifying by a mere four points at the regional meet in 2013.

Ostertag commented on the chance of making it to the state meet.

“This year we have a great pack and if we can stick together during the (regional) race and get out hard we will give ourselves a great chance,” said Ostertag. “It is going to take everyone’s best race but making it to the state meet is certainly a possibility for this team.”

However, standing in the way on the road to the state meet are some pretty tough teams.

“We don’t have a front runner on the team this year but instead have a pack of five guys in the front,” said Spencer. “We need to move the pack up during the regional race if we want to knock of teams like LaSalle, (Lakota) East, and Oak Hills.”

If the team wants to beat the teams above and qualify for the state meet, they are going to need a variety of guys need to step up.

“If we want to make a run, our six through seven guys need to step up,” said Kehling. “I think sophomore Nick Merk and juniors Adam Noeth and Andrew Schenkel will really step up towards the end of the season.”

“(We need) Andrew Schenkel. He has been our eight to tenth man throughout the season and he finally reached that varsity spot at Galion. He could play a big role in the postseason and he pushes our pack up,” answered Ryan Schenkel.

“This year, we have had a different sixth or seventh guy almost every race so I expect to see some of the older guys show their experience to take over those spots permanently,” said Ostertag. “However, the stud sophomores will give them a real challenge for those spots, and that is exactly what we want.”

While speaking of those stud sophomores, we asked Schenkel which underclassmen have a bright future ahead of them. He responded, “Of course you have the “big three” sophomores (referring to Nick Merk, Jacob Melvin, and Eli Guck), but one man that I see having a bright future is Jack Faecher. He is my dark horse varsity runner for next year.”

Another major questioned ask to some members of the team is how do you get pumped up to go run a 3.1 mile race? Kehling responded, “Waka Waka (This Time for Africa) by Shakira.” The pump-up song was brought to the team by the always-spirited senior Brad Quatman who you may hear singing it before the race starts on Saturdays. When asked the same question, Ostertag answered, “Phenomenal from the movie, Southpaw.”

While you may find both of the senior captains listening to their pump-up songs before each meet, you may find Ryan Schenkel doing something else. “We Ready by Archie Eversole. I always roll up to the meeting listening to this, unless I’m sleeping,” exclaimed Schenkel.

We will be running on November 7th”

Although you may find some members of the Purple Pack sleeping before the race, they aren’t sleeping on their own performances on the course. Kehling showed his confidence by saying, “We will be running November 7th (the day of the state meet).” 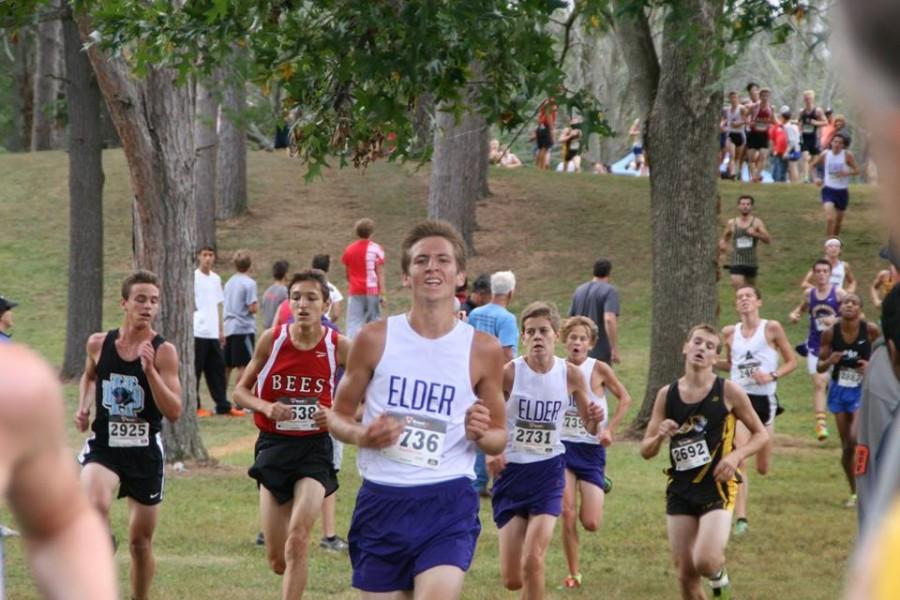 Gallery|6 Photos
Eric Ostertag (front), Kyle Kroeger (middle), and Ryan Schenkel (back) starting to kick it in at the end of the Galion CC Invite
Leave a Comment